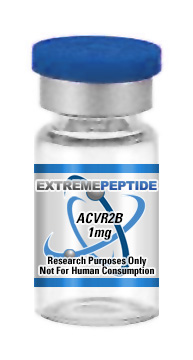 The biggest amount of scientific study based on animal test subjects in conjunction to ACVR2B is the relationship between the peptide and how it could conceivably combat the scourge of muscular dystrophy.

The term muscular dystrophy is an umbrella term describing a group of muscular diseases that weaken the musculoskeletal system and ultimately slows down motion.  It is chiefly characterized by progressive weakness in the skeletal muscle, defects in muscle proteins, and the death of muscle tissue and muscle cells.  Most types of the condition are multi-symptom disorders that appear in body systems such as the heart, nervous system, endocrine glands, gastrointestinal system, brain, and eyes.

Scientific study that has conducted on animal test subjects has determined that Duchenne Muscular Dystrophy is caused due to a lack of the dystrophin, a protein that connects the cytoskeleton of a muscle fiber to the adjacent extracellular matrix via the cell membrane.  It has been deduced that the severity condition correlates with the amount of properly functioning dsytrophin that is present.  If there is an abundance of defects within the dystophin-glycoprotein complex – that is, the structure that involves dystrophin along with the presence of other key protein compounds – contraction of the muscle leads to the disruption of the outer membrane of the muscle cells and, eventually, the weakening and the wasting of the muscle itself.

The theory behind the usage of ACVR2B to combat Duchenne Muscular Dystrophy, according to scientific study that has been built on animal test subjects, is that the peptide’s ability to block myostatin’s basic function to regulate muscular growth and strength can counterbalance the negative effects that can come about due to a lack of dystrophin.  Theoretically, the patient suffering from the condition would be able to achieve a proper amount of homeostasis in terms of muscle growth and strength, thus allowing them to have muscles that function properly as opposed to being weakened and wasted.

Theoretical Side Effects of ACVR2B

Scientific study that has been derived from animal test subjects has also determined several side effects that have been linked to the presence of ACVR2B.  Most of these particular negative side effects are in relation to bleeding, particularly minor bleeding through the nose, the gum, and/or minute dilated blood vessels from within the skin.  That being said, these studies have also indicated that the instances of bleeding were considered to be minor in nature.  Furthermore, it was determined that the dilated blood vessels within the skin were not considered to be a serious threat of safety amongst the animal test subjects involved in the study.

Although there has been an extensive amount of research and study conducted in relation to ACVR2B and its overall functionality, operational mechanics, and theorized benefits, it needs to be noted that all of the research that has been conducted and the subsequent results from such research has been solely built around the scientific study based on animal test subjects.  The peptide is only intended for the use of scientific study at this point in time.  Therefore, any findings or observations that relate to ACVR2B’s overall functionality, mechanics, or theoretical benefits, should only be contained to the strict confines of a controlled environment such as a medical research facility or a laboratory.