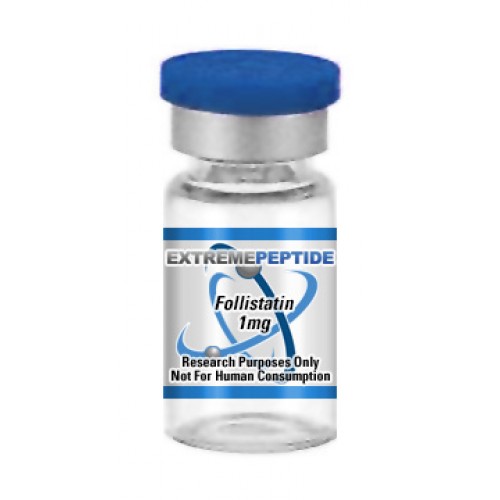 Additional scientific study that has been conducted on animal test subjects has also determined that Follistatin 344 acts as an antagonist to myostatin; a protein that is known for the regulation and control of muscle mass and size when it is released.  Studies that were conducted on laboratory mice demonstrated that Follistatin 344’s ability to block the protein resulted in an increase of muscular mass within the rodents over a set period of time.

Because of the way in which Follistatin 344 works in conjunction with myostatin, there have been a host of scientific studies conducted on animal test subjects that have determined that the peptide could be hypothetically linked to a growth in muscle mass and increases in strength.  This particular theory has been built around the notion that the peptide’s ability to inhibit the secretion of myostatin would allow an animal test subject to experience a boost in the proliferation of muscle cells, which in turn would allow for an increase in muscle mass to occur.  This particular theory was the central focus on a study that was built around macaque monkeys; the resultant data that was derived from studying the primates demonstrated that regulating the peptide through the process of gene therapy led to the growth of muscle and the increase in strength.

The monkey-based study has led to the hypothesis that the inclusion of Follistatin 344 into the process of gene therapy could contain several potentially positive ramifications in relation to a host of muscle-related ailments.  Studies in this field are particularly focused on the ways in which the peptide could theoretically aid in the treatment of muscular dystrophy.  This particular condition is representative of several muscle diseases that have been shown to weaken the musculoskeletal system, which in turn has a negative impact on mobility.  Some of these diseases include Becker muscular dystrophy, Duchenne muscular dystrophy, Limb-girdle muscular dystrophy, and myotonic muscular dystrophy.  The diseases are characterized by defects in muscle proteins, progressive skeletal muscle weakness, and the death of muscular cells and muscular tissue.  It is thought that the presence of Follistatin 344 could aid in replenishing strength levels to the affected muscles, which in turn could reverse the negative effects of the condition.

Further studies that have been conducted on animal test subjects in relation to Follistatin 344’s presence has determined that an increased volume of the peptide and its ability to increase muscle mass of specific core muscular groups, can hypothetically lead to an increase in life expectancy in cases of spinal muscular atrophy.  Also known as SMA, this autosomal recessive disease is caused by a genetic defect; this defect can lead to the death of neuronal cells in the anterior horn of the spinal cord and lead to subsequent atrophy (that is, muscle wasting) throughout the entire system.

It has been determined through scientific study based on animal test subjects that there are no negative side effects that have been linked to the presence of Follistatin 344.  Despite the fact that there are still ongoing studies that are being conducted in order to determine if there is any correlation that could conceivably link a mutation of the peptide with polycystic ovary syndrome, it should be reiterated that such studies do not involve instances of Follistatin 344 that are considered to be non-mutated in its form.  As of now, there has been no negative association linked to Follistatin 344’s non-mutated iteration.

Despite the fact that there has been a significant amount of research on Follistatin 344 in relation to how it functions as well as the benefits that can be derived from such functionality, it should be emphasized that the peptide is still just intended for scientific study on animal test subjects at this point in time.  All matters of research that relate to the way in which Follistatin 344 operates and functions has all been culled from scientific study that has been done on animal test subjects.  As a result of this, any findings or observations that can be tied to Follistatin 344’s overall functionality, operational mechanics, potential benefits, and potential side effects should exclusively be the product of study performed in a strictly contained environment such as a medical research facility or a laboratory.