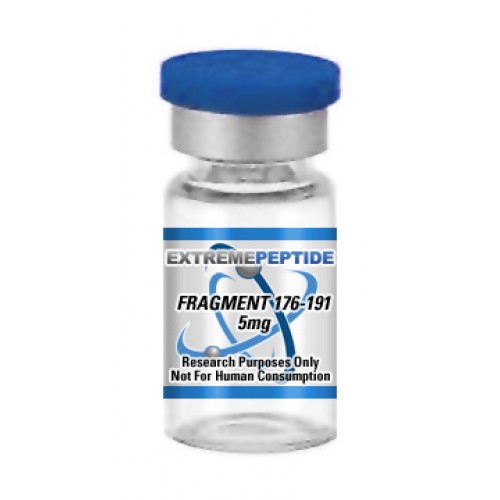 As the name may suggest, Fragment 176-191 is a peptide that is linked to the amino acids 176-191.  It can occasionally be referred to as neuron cytoplasmic protein 9.5 or gracile axonal dystrophy.  According to scientific study on animal test subjects, the peptide has been shown to stimulate the breakdown of fats and has demonstrated a capability to slow down the formation of fatty acids.

Scientific study on animal test subjects has shown that Fragment 171-196 operates by imitating the process in which natural growth hormone controls fat metabolism.  However, it performs this task without inadvertently promoting adverse effects on blood sugar or cellular proliferation.  This process enables the peptide to do the following:

Fragment 176-191 promotes these processes by promoting the breakdown of fat while at the same time being able to block the configuration of different lipids and fatty acids throughout the body.  The peptide’s twofold process have been shown to improve the animal test subject’s ability to burn through adipose tissue in a manner that is safe to the rest of the body.

Because of Fragment 176-191’s operational mechanics and their relation to the breaking down of adipose tissue and the slowing down of lipogenesis, scientific research is primarily targeted toward its ability to promote the loss of weight in animal test subjects.  However, further clinical research has been able to demonstrate a potential effect tied to slowing down the aging process amongst animal test subjects; an effect that has been witnessed during times when the test subjects were given the peptide on a regular basis.  The studies have theorized that this slowing down of the aging process correlates to Fragment 176-191’s ability to efficiently burn through adipose tissue.

Other Theorized Benefits to Fragment 176-191

Further studies on animal test subjects have also theorized that Fragment 176-191 could be tied to several other positive benefits.

One of these benefits may be related to the regulation of insulin.  Scientific study on animal test subjects has determined that the peptide does contain the ability to boost the level of blood glucose levels over a short interval of time.  Additionally, they were able to achieve a longer lasting boost in insulin levels found in the plasma of animal test subjects.  Because Fragment 176-191 is in essence a chain of amino acids, scientists have been able to point to these findings relating to insulin as a means to demonstrate how various amino acids can work in unison with each other in order to better manage the way insulin travels within the test subjects’ body and how it can be used in various body parts.  Scientific study also points to the fact that Fragment 176-191 does not hinder the glucose level in any way during its process; something that has a tendency to happen with other peptide chains that would otherwise behave in a similar fashion.  What’s more, these studies also demonstrate the peptide’s inherent bioactivity (that is, its interaction with or effect on any cell tissue) can remain fully functional with a minimum of the proper informational sequence.

Another one of these theorized benefits relates to Fragment 176-191’s accelerated expulsion of energy.  The peptide’s ability to accelerate the burning of adipose tissue also gives it the ability to boost the levels of energy that can get converted on a cellular level.  This boost of energy is theorized to provide an accelerated rate to several processes within animal test subjects, including an increase in muscle mass.

A third theorized benefit relating to the peptide correlates with the concept of mental health.  Scientific study on animal test subjects have determined that Fragment 176-191’s processes can allow it to potentially stop the kind of basal lesions that are present within the start of Parkinson’s disease.  Furthermore, the peptide’s inherent capabilities may serve to counteract the toxicity of the kind of protein malfunctions that are present at the onset of Alzheimer’s disease.  This theory has been boosted due to studies that show that brains that are suffering from Parkinson’s or Alzheimer’s display a down-regulated amount of the peptide attached to their neuroendocrine system.

For Scientific Research Only
Even though there has been a host of research and study conducted relating to Fragment 176-191 and its overall functionality, operational mechanics, and theorized benefits, it should be noted that all of the research that has been conducted and the subsequent results from such research has been built around the scientific study based on animal test subjects.  The peptide is only intended for the use of scientific study at this point in time.  Therefore, any findings or observations relating to Fragment 176-191’s overall functionality, mechanics, or theoretical benefits, should only be contained to the strict confines of a controlled environment such as a medical research facility or a laboratory.