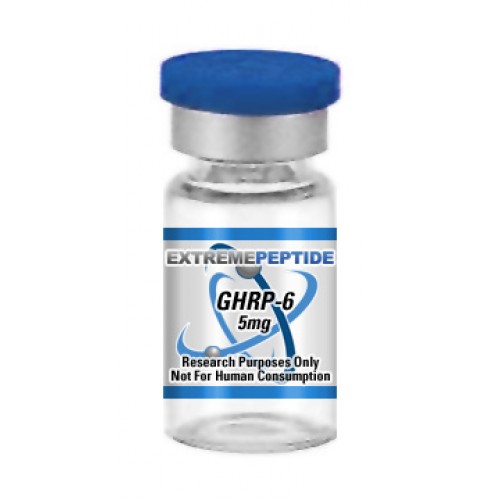 The peptide GHRP – 6 is a hexipeptide, meaning that its structure is that of a chain consisting of six amino acids.  It is considered to be a secretogogue, meaning that it is a substance that causes a separate substance to be secreted.  It has a molecular formula of C46H56N12O6, and its molecular weight is 873.014.

In essence, GHRP – 6’s overall operational mechanics can be traced to four vital components to an organism, according to scientific study that has been based on animal test subjects.  These components are:

In essence, GHRP – 6 has been shown to block the pituitary gland’s ability to inhibit the production of secretions in animal test subjects.  What this means is, it provide an enhanced ability to produce hormones related to an animal test subject’s growth, thus enabling the subject to experience a significantly more efficient means of experiencing a level of homeostasis.

Additionally, scientific study based on animal test subjects has shown that it can boost the travel of information of this increased capacity for secretion production.  It can do this because it has been determined to aid in the activation of intracellular signaling pathways used by hormones as it enhances the process of cellular survival.  This link has led studies to determine that its presence could play a vital role in preventing loss and function on a cellular level in the wake of a hypoxic-ischemic brain injury such as a stroke or a lack of oxygen to the brain as brought about by cardiac arrest.

Further scientific study based on animal test subjects has been able to indicate that GHRP – 6 has the ability to increase the production of the amino acid ghrelin.  This amino acid, which is primarily produced by the cells that line the stomach, stimulates the sensation of hunger as it counteracts the production of leptin; an amino acid whose secretion stimulates the sensation of feeling full.  GHRP – 6 has been shown to increase levels of ghrelin production, thus allowing the animal test subject to experience a greater need to intake food for fuel.  This added fuel in turn allows for the increased secretions as dictated by GHRP – 6’s relationship with the pituitary gland to take place.

GHRP – 6 has also been shown to be instrumental in the production of IGF-1, or Insulin-like Growth Factor 1.  This stomach-expressed secretion has been shown to possess anabolic properties, meaning that it plays a role in boosting the growth and repair of muscles and tissues.  GHRP – 6 has been shown to possess a capacity to boost the production of this particular secretion in animal test subjects, thus enabling a more efficient means of homeostasis relating to muscle and skeletal tissue growth.

The Results of these Interactions

According to scientific study that has been conducted on animal test subjects, it has been determined that GHRP – 6 and its overall functionality enables a host of boosted processes to occur.  For example, its relationship with IGF-1 has led to the notion that it can boost muscle mass and the rate of muscle and tissue repair.  This same relationship has also been linked to a promotion of bone tissue growth.  Its ability to provide a higher rate of functionality through the pituitary gland has also led to the notion that it can promote an accelerated rate at which adipose tissue (that is, body fat) can be broken down, despite the fact that its interaction with ghrelin could cause a higher intake of food.  Other elevated processes linked to GHRP – 6 include a strengthening of joints, strengthening of connective tissue, and a boosted immune system.

Although there has been an extensive amount of research and study conducted in relation to GHRP – 6, it needs to be noted that all of the research that has been conducted has been solely built around the scientific study based on animal test subjects.  Therefore, any findings or observations that relate to GHRP – 6’s overall functionality, mechanics, or theoretical benefits, should only be contained to the strict confines of a controlled environment such as a medical research facility or a laboratory.