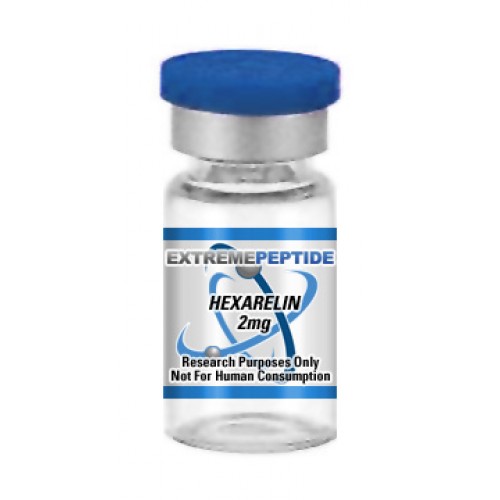 The secretogogue Hexarelin is a hextipeptide, meaning that it is a peptide whose structure is comprised of six amino acids.  This gives it a structural integrity that is similar to the peptide GHRP-6.  Its molecular structure is C50H69N15O9, and it contains a molecular weight of 1024.2.  It sometimes is referred to as Hex, and has a half-life of about 70 days.

Hexarelin’s Relationship with the Brain

It has yet to be determined how exactly Hexarelin operates in the manner in which it does.  However, scientific study conducted on animal research subjects has determined that the peptide does act in conjunction with two regions of the brain. The first region is the hypothalamus, the section of the brain that links the endocrine system with the central nervous system, and the second region is the pituitary gland, the section of the brain that acts as the regulator of an animal test subject’s endocrine system-related processes.  While it has been determined that an association between Hexarelin and these segments of the brain exist, the peptide’s overall effects on the brain have yet to be determined.

Even though the functionality of Hexarelin has yet to be pinpointed, scientific study based on animal test subjects has been able to target specific processes that can be linked to the peptide’s presence.

For example, it has been determined that the peptide’s relationship with the hypothalamus and the pituitary gland plays a role in the peptide’s ability to boost the performance of several bodily processes related to the endocrine system.  Some of these processes include a more efficient rate of mitosis and meiosis, elevated levels of bone density, an accelerated rate of fat loss, a strengthening of connective tissue, and elasticity.  This has led to the theory that Hexarelin may be a vital component in terms of improving muscle strength, endurance, joint rehabilitation, and wound healing.

Additionally, it has been determined that the peptide has the ability to induce a boosted secretion level of IGF-1.  This protein, which is secreted by the liver in animal test subjects, is shown to be instrumental in the growth and repair of muscles and tissues.

One of the bigger determinations about Hexarelin concerns one action that it doesn’t do.  Unlike other peptides that have been shown to produce similar activities, Hexarelin does not induce an elevated production level of ghrelin.  This is the 28 amino acid peptide that is produced by the stomach in animal test subjects as a means to stimulate the sensation of hunger.  Because Hexarelin does not produce an elevated level of this secretion, an animal test subject can retain a level of homeostasis when it comes to the desire to consume food.

A great deal of scientific study based on animal test subjects has been concerning a potential link to Hexarelin and the heart’s overall functionality.  Specifically, this research has honed in on the notion that the peptide could potentially include specific properties that can result in an additional layer of heart protection.

Other studies concerning the peptide revolve around Hexarelin’s potential link to the process of apoptosis, otherwise known as programmed cellular death.  It has been theorized that the peptide’s presence can be linked to the overall functionality of Caspace 3 and Akt.  These two peptides have been shown to play a vital role in the regulation and control of the apoptosis process.

According to scientific study based on animal test subjects, it has been determined that Hexarelin is linked to a few negative side effects, most of which have some sort of link to various secretions relating to the endocrine system.  Some of these negative side effects include: