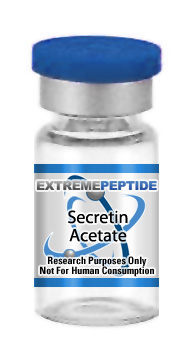 Secretin acetate is a hormone that is responsible for controlling the environment of a duodenum by regulating pancreatic and stomach secretions while regulating the water homeostasis throughout an animal’s body. Specifically, it helps to regulate the duodenum’s pH by inhibiting the secretion of gastric acid from the parietal cells of the stomach and increasing stimulation of the bicarbonate production in the centroacinar cells from the pancreas.

More recent research has determined that this chemical may play a role in osmoregulation by helping to manage the kidneys pituitary and hypothalamus.

Secretin was one of the first hormones to be identified in 1902 by Ernest Starling and William Bayliss who were looking to understand more about how the nervous system works to control digestion.

The increased role of secretin acetate way discovered by performing autopsies on animals as this was the most advanced means of investigating the chemical makeup of a mammal’s body at the time. It was then discovered that it was not the nervous system but hormones that were impacting the controls Bayliss and Starling were hoping to discover.

In Vitro Inhibitory Effects of Somatostatin

Exocrien pancreatic function has been found to influence islet hormones and the existence of somatostatin receptors can shut down pancreatic acinar cells.

Conclusions to this study revealed that somatostain will act directly upon acinar cells. This will inhibit the potentiation of secretin and the secretory response to this hormone. This is partially due to inhibiting cAMP production in vitro.

Rats that were placed unconscious were given intravenous cerultide in large applications to develop acude pancreatitis to determine the effects of secretin on the body.

Secretion of low doses along with ceruletide increases the protective effect of secretin. This produces a macroscopic, biochemical and microscopic effect on the pancreatitis. It redirected zymogen granules of the acini in the animals that were provided secretin applications which were shown to be quite beneficial in managing the condition.

Much of the research surrounding secretin acetate today revolves around further understanding the complex role of hormones in mammals and how they interact with other systems of the body to control essential functions. Much of how secretin acetate interacts with other hormones is still being learned, as is the effects of a deficit of this chemical on the body can affect an animal’s overall health.