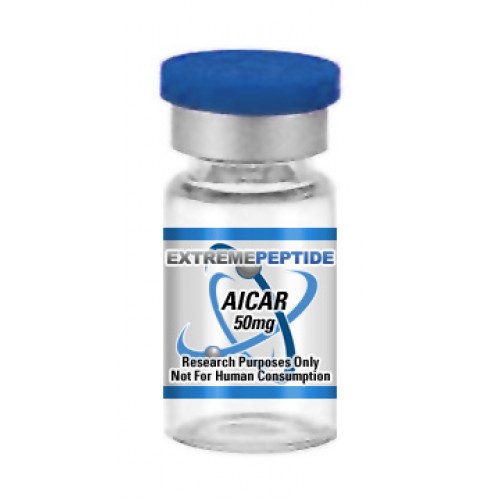 AICAR is a peptide whose technical name is 5-Aminoimidazole-4-carboxamide ribonucleotide.  It can also be known as AICA ribonucleotide, ZMP, or Acadesine.  It is an intermediate contained in the generation of inosine monophosphate.  It primarily functions as an AMP-activated protein kinase agonist, meaning that it has the ability to promote the operation of nutrient stores for energy production.  It has a molecular mass of 338.211, and it has a molecular formula of C9H15N4O8P.

In a nutshell, AICAR functions by promoting the utilization of nutrient stores so that energy may be produced.  What this means is, scientific study based on animal test subjects has been able to determine that the peptide contains the ability to control and regulate various metabolic processes.  These processes include cellular glucose uptake, β – oxidation of fatty acids, and biogenesis of mitochondria and glucose transporter 4 (GLUT4).  The end result of all these processes means that AICAR’s functional mechanics enable a boost of energy in addition to control over several key bodily processes.

Scientific study based on animal test subjects has determined that AICAR can play a hand in boosting these processes because it contains the ability to penetrate cardiac cells and block the production of enzymes tied to regulating glucose intake and energy expulsion.  With these regulatory enzymes inhibited, the affected cells can in turn boost the amount of glucose that can be received, and it can also increase its level of energy conversion.  Additionally, the peptide’s presence has been determined to aid in lowering programmed cell death, a process that is also known as apoptosis.

Ultimately, all of these elevated processes combine to provide an animal test subject an easier time in which it can achieve a level of homeostasis.

Because of the way in which AICAR has been shown to function, scientific study based on animal test subjects has determined that the peptide can be responsible for the following elevated processes:

According to scientific study that has been based on animal test subjects, it has been determined that AICAR possesses a positive link in combating insulin resistance.  This condition is physiological in nature, and is built on a cellular unit’s inability to respond to normal reactions brought about by secretions of insulin.  Studies have shown that the peptide has an ability to enhance a proper cellular response to insulin secretions.  The action of lowering insulin resistance within an animal test subject can be directly linked to AICAR’s faculty to promote the uptake of glucose; a process that is also vital for the overall growth and repair of muscular and skeletal tissue.

Scientific study based on animal test subjects has also determined that AICAR can play a key role in the prevention and treatment of cardiac arrest.  Because the presence of the peptide has been shown to promote a more efficient means of carrying glucose to cells, it is believed that this action can serve to counteract a deficiency in glucose carriage during an episode of cardiac arrest; a condition that is in part caused by a lack of fuel needed to convert the energy needed to provide homeostasis.  Furthermore, it has been deduced that these same abilities may allow the peptide to act as a stabilizing agent in the wake of cardiac arrest episode.  Ultimately, AICAR is thought to be able to reduce the risk of cardiac arrest from occurring, or at the very least, minimizing the resultant damage if it does occur.

Any research and the subsequent results of such research have solely been built on scientific study that has been based on animal test subjects.  Because of this, it needs to emphasized that any observations in relation to AICAR should be contained to a controlled environment like a medical research facility or a laboratory only.