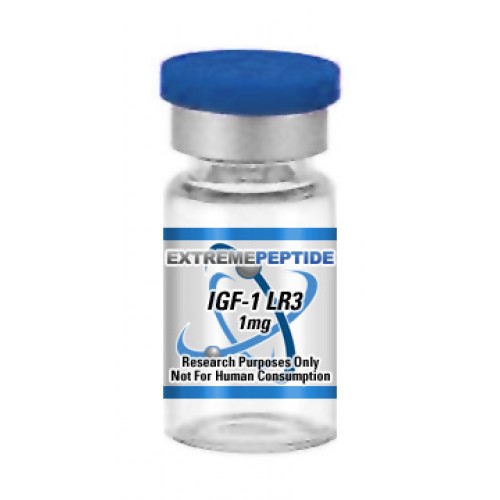 The polypeptide IGF-1 LR3, also known as Long r3 igf-1, has a molecular structure of C990H1528N262O300S7 and a molecular weight of 9200.  It is made up of a chain of 83 amino acids, and sometimes gets mixed up with the peptide chain Long r2 ifg-1 because it has a similar molecular build and similar structural properties.

Scientific study that has been based on animal test subjects has determined that IGF-1 LR3’s functionality can be partially traced to the relationship that it has with the liver.  This vital organ is primarily responsible for regulating an animal test subject’s detoxification, digestion, and protein synthesis processes.  Specifically, the association with the organ can be tied to the expression of a specific secretion known as IGF-1, also known as Insulin-like Growth Factor-1 or Somatomedin C.  The downside of this secretion is its rapid half-life, which only lasts for around 20 minutes.  However, it has been determined that the presence of IGF-1 LR3 can significantly boost this half-life to an interval of time that lasts around 20 hours.

IGF-1 LR3 and the Pancreas

Further scientific study that has been based on animal test subjects has also determined that IGF-1 LR3’s sense of operational mechanics can also be partially tied to the pancreas.  This is the glandular organ and key member of the endocrine system that has been shown to play a key role in the production of hormones as they relate to an animal test subject’s overarching functional processes.  Specifically, the peptide’s relationship with the pancreas is completely tied to its production of insulin; the secretion whose expression is responsible for enabling the cells in the liver, skeletal muscles, and fat tissues to absorb glucose from the bloodstream in a proper manner.  IGF-1 LR3 has been shown to help this absorption process along by acting to accelerate insulin transport throughout an animal test subject’s bloodstream.

This process of elevated glucose transport that IGF-1 LR3 can influence through its relationship with the pancreas has a direct impact on its relationship with the liver.  Because it has been shown to lengthen the functionality of the liver-based secretion IGF-1, this boosted interval of action is fueled by the peptide’s ability to provide it with the fuel that it needs on a more efficient basis.  Ultimately, this has led scientific study based on animal test subjects to note that the peptide has the faculty to produce an increased synthesis of proteins and RNA as well as a decrease in protein degradation.

Because of these elevated processes, scientific study that has been based on animal test subjects has determined that IGF-1 LR3 can be linked to a trio of hypothetical benefits.  These benefits are:

While plenty of research has been conducted regarding the overall functionality and mechanics of IGF-1 LR3, the peptide is still solely intended for the use of scientific study.  Specifically, any research and the subsequent results of such research have solely been built on scientific study that has been based on animal test subjects.  Thus, it needs to be emphasized that any observations in relation to IGF-1 LR3’s overall functionality or mechanics should be contained to a controlled environment like a medical research facility or a laboratory only.