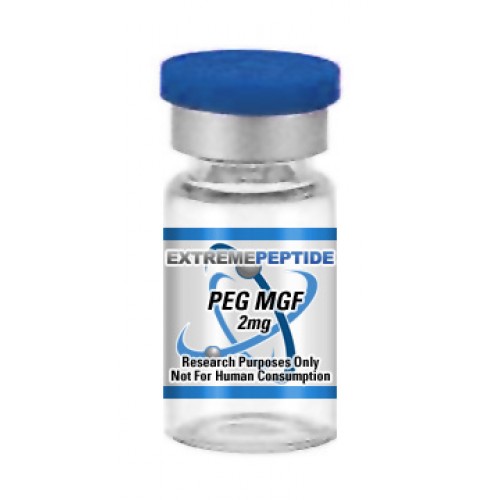 The systematic, water-soluble peptide Peg MGF – short for PEGylated Mechano Growth Factor – is a combination of Polyethylene glycol and the repair factor MGF.  It has a molecular formula of C121H200N42O39, and it carries a molecular mass of 2867.2.

The Basics of Peg MGF

According to scientific research that has been conducted on animal test subjects, Peg MGF works with the secretion known as mechano growth factor (hence the MFG in the peptide’s name).  This secretion occurs as a means to counterbalance the effects of cellular terminal differentiation as it stimulates instances of muscular and skeletal growth and repair.  In other words, it not only plays a role in regulating muscular and skeletal tissue in animal test subjects, it also slows the last stage of cellular differentiation in which a cell is no longer functional.  The downside to mechano growth factor’s overall functionality is that exhibits a very rapid half-life lasting only a few minutes in length.

However, Peg MGF is able to extend the half-life of mechano growth factor by exhibiting a process that is known as PEGylation.  In essence, this process allows for a covalent attachment to form between the peptide and the secretion.  In turn, this attachment serves to act as a protective barrier for the mechano growth factor molecule.  This process enables the secretion to pass through the bloodstream without experiencing the level of degradation that it otherwise would.  This manner of protection – and the extending of the half-life that comes with it – thus enables a greater level of stability which also allows the secretion’s overall functionality to increase.  In this case, scientific study based on animal test subjects has determined that this elevated functionality translates into a boosted level of muscle and tissue growth and repair, which in turn leads to a more efficient means of achieving homeostasis.

Scientific study that has been built around animal test subjects has determined that Peg MGF’s functional processes has enabled it to possibly be key in elevating several rudimentary processes that are linked to muscle and tissue growth and repair.  Some of these processes include:

Additional study that has been conducted on animal test subjects has determined that Peg MGF’s ability to enable a more stabilized method of travel throughout the bloodstream could make it a key component in aiding in the stabilization of cellular response in the event of an ischemic episode.  This is a condition that is brought on due to a restriction of blood supply to tissues, which in turn causes a shortage of the oxygen and glucose needed in order for proper cellular metabolism to occur.  Some of these ischemic episodes include stroke, angina pectoris, cardiac arrest due to a heart attack, and an insufficient level of oxygen delivered to an effected area in the wake of a traumatic injury. 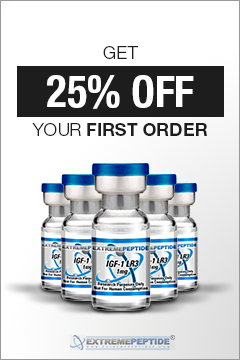 If you are planning to conduct some peptide research you are going to want to use the purest and most reputable peptides available in the USA. Extremepeptides.com has been a trusted supplier of peptides and research chemicals to countless researchers since 2010.

You can get 25% off of your first order by signing up for our newsletter. We also update our newsletter subscribers with other coupon codes and promotions as we release them.

If you have any questions or need any help please do not hesitate to contact our support team by clicking here.

MGF (Mechano Growth Factor), also known as IGF-1Ec or IGF-1Eb, is a peptide that is expressed on a cellular level from the liver of animal test subjects.  Its molecular mass is 2888.16, and its molecular formula is C121H200N42O39.

According to scientific study based on animal test subjects, it has been shown that MGF (Mechano Growth Factor)’s mechanics enable it to do the following processes:

Additionally, scientific study based on animal test subjects has shown that MGF (Mechano Growth Factor) is primarily expressed in different tissues or in response to various stimuli.  The peptide has also been shown to display some preferences regarding the signal transduction pathways they activate.

Scientific study based on animal test subjects related to MGF (Mechano Growth Factor) and its overall functionality has been able to derive several theoretical benefits in relation to the peptide.  Several of these benefits are linked directly by how MGF (Mechano Growth Factor) is able to extend the half-life of secretions relating to muscle and tissue cells as well as its ability to inhibit terminal differentiation.

For example, it has been theorized that MGF (Mechano Growth Factor)’s ability to extend the half-life of cellular secretions allows the presence of the peptide to allow for a more efficient process of building and repair of muscles and tissues for an animal test subject.  These same principles have also led studies to derive that MGF (Mechano Growth Factor) can enable a longer interval of time in which damage done to muscle fibers and skeletal tissue can be attended to internally, thus enabling a faster, more efficient rate of injury recovery.  Additionally, it has been determined that MGF (Mechano Growth Factor)’s overall functionality in conjunction with skeletal tissue enables a more efficient production of bone minerals to occur.  This in turn would allow the bones in animal test subjects to increase its overall density quicker.

Another theorized benefit that has been derived through scientific study of animal test subjects relates to MGF (Mechano Growth Factor)’s ability to in essence choose the signal transduction pathways that the activate.  It has been thought that this aspect of the peptide’s operational mechanics could enable it to be an aid in stabilizing certain functions within an animal test subjects’ body in the wake of an ischemic episode.  These kinds of episodes include stroke, cardiac arrest due to a heart attack, angina pectoris, or a lack of oxygen delivered to an effected area after a traumatic injury.

While scientific study based on animal test subjects has been able to derive a host of theorized benefits in relation to MGF (Mechano Growth Factor), it has also been determined that the presence of the peptide can be linked to several negative side effects.

The primary negative side effect that has been associated with the presence of MGF (Mechano Growth Factor) is hypoglycemia, more commonly known as low blood sugar.  The reason behind this hypothesis ties to the way in which the presence of the peptide can increase the efficiency of cellular functionality.  That being said, it has been determined that this negative side effect can be countered by the animal test subject increasing its glucose intake.

Other potential negative side effects that have been linked to the presence of the peptide include the swelling of extremities, a drop in blood pressure, and various cardiovascular irregularities including cardiac arrest.