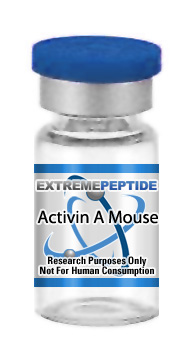 Activin is closely related to the protein complex inhibin, though they are designed to work against each other when they are produced by an animal’s body. Activin is designed by the body to maintain natural FSH biosynthesis, as well as the secretion of the necessary chemicals, for this interaction.

Activin has also been noted to participate in a variety of roles throughout an animal’s body including differentiation apoptosis, cell proliferation, immune response, metabolism, homeostasis, endocrine function and wound repair.

A synthesized version of activin is designed to provide similar effects when applied to an animal, as research studies have seen. This complex may work alongside similar natural peptides including TGF beta, bone morphogenetic protein, anti-mullarian hormone or growth differentiation factor.

Research will often combine applications of these chemicals in an attempt to produce natural results within the animal.

Role of Activins in Animals

Research of a variety of chemicals including activin a are being used to help understand their role within animals including the signals they send throughout the body.

Some of these test subjects showed alterations in facial or skeletal growth but most lacked any significant deficit and grew into adults without issue.

Studies of both activin and EDF have been used to mediate physiological events at sites throughout an animal’s body.

This study noted that the activin levels from the serum were ovariectomized in mice that were more advanced in age, which helps to suggest that the body produces serum activin in the ovaries as well as extragondal organs.

It was also noted that the serum activin was quite different in structure from natural inhibin while natural forms of this chemical are quite similar, which may play a role in future research.

Activin is a protein complex that shows a dimeric structure. Within the complex itself there have been noted two monomers that are linked by a disulfide bond with a single attachment. Activin is derived from an identical family of genes as inhibin, though they produce opposite effects in the body, and in turn, alter in their sub-unit composion to create a notable difference in their overall structure.
Activin may appear with a variety of structures in a natural setting depending on its desired role in the body. Naturally, it may also be produced by the animal’s pituitary gland, gonads, placenta among other organs.