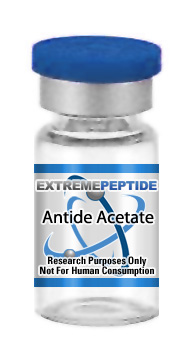 Antide acetate is a peptide which acts as an LHRH antagonist in ‘natural settings’ and can be utilized by an animal’s body to represses FSH and LH releases that stem from the pituitary gland. Synthetic versions of this chemical have been developed as a means of controlling these reactions in a laboratory setting, both as a means to determine a potential medical use for antide acetate and to help researchers better understand the role of this chemical in an animal’s body when it is naturally produced.

Antide acetate that is prepared for use in a laboratory setting is provided in a lyophilized sterile condition that can be reconstituted or diluted with an aqueous solution as necessary for the given application. Researchers are encouraged to seek out a supply that is prepared without additives, to ensure accurate and reliable testing results once the chemical is in use.

Protein quantitation via analysis of the calibrated solution of the chemical or UV spectroscopy set to 280 nm is recommended when applicable.

A recent study worked to determine the effects of GnRH analogues leuprolide acetate as well as cetrorelix acetate on the matrix of the leiomyoma in myometrial cells.

Exposing the cells to high concentrations of these chemicals did not increase fibronectin protein production. Protein production in cells that were treated for 120 hours did see an increase in GnRHR1 as well as the virsican variants and fibronectin though only in similar quantities to those in earlier demonstrations.

Studies worked to show the potential use of an oral delivery system in vivo that could be used to apply antide or other peptides.

Results indicated that time release antide incorporated tablets could be seen under a plasma concentration that were comparative to supplying an antide solution directly, implying that this system could improve the bioavailability of select peptides.

It is recommended that researchers reconstitute a lyophilized sample of antide acetate, using 18M of water, though this may vary given the size and methodology used in the preparation of the sample. The concentration of the chemical should be noted on the individualized packaging that was prepared with the product.

This concentration and size may vary based on the lab animals the sample was intended to be used with. Most are prepared for use in rats, so researchers should react accordingly.