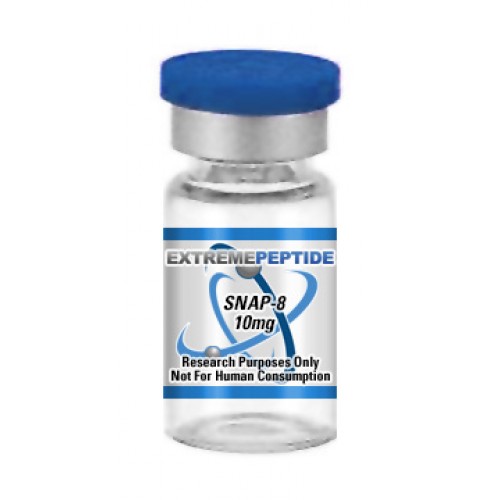 According to scientific study that has been conducted on animal test subjects, the primary benefit that has been linked to SNAP-8 involves the elimination and reduction of wrinkle and line depth.  Studies on animal test subjects have further indicated that this particular benefit that is thought to be derived from this particular peptide’s presence is especially prominent within specific segments of the facial area, such as the all across the forehead and around the eyes.  The impetus behind this particular theoretical benefit has to do with the peptide’s capacity to bring about a more consistent means of releasing the neurotransmitters that are responsible for signaling the process of muscle contraction.  This more consistent means of muscle contraction signaling that is provided by a more stabilized ability to release the neurotransmitters allows for a greater ability for the animal test subject to retain a proper level of muscular homeostasis.  This in turn produces a process that is an essential step in preventing the formation of deep wrinkles and lines from occurring.

It has also been determined that the peptide’s theoretical benefit of providing a greater sense of homeostasis in terms of muscular contraction gives it both preventative and replenishing capabilities.  Scientific study based on animal test subjects has determined that the peptide’s ability to signal muscle contraction on a more efficient basis could theoretically remove the presence of wrinkles that already exist, especially those that exist on an animal test subject’s face.  The notion behind this particular thought process is that by allowing the muscles to contract on a more regulated basis through a more efficient means of neurotransmission, the deep wrinkles and lines that form because of an inconsistent means of muscle contraction would fade because the muscle would be achieving a level of homeostasis on a significantly more efficient level.  In essence, due to the fact that wrinkles and lines are a product of destabilized muscle contraction and not necessarily a by-product of muscular damage, the natural process of muscle contraction as derived by proper neurotransmission would be restored, which in turn would cause the affects of prior instances of instability to be lessened on a significant basis.

Because of the peptide’s capacity to prevent wrinkles and lines, and its ability to reverse the appearance of wrinkles and lines, scientific study that has been based on animal test subjects has determined that the presence of SNAP-8 could conceivably carry anti-aging properties.  This particular concept is similar to a concept that was derived through animal test subject based scientific study processed in conjunction with acetyl hexapeptide-3.  However, the main difference between that particular peptide and SNAP-8 is that the latter has been determined to perform with a greater sense of efficiency.  This is due to the notion that SNAP-8 is able to function as a neurotransmittal stabilizing agent with a greater sense of efficiency than acetyl hexapeptide-3.

No Negative Side Effects

Despite the fact that an extensive amount of study and research has been done in order to pinpoint the overall functionality of SNAP-8, up to and including the ways in which it can promote various process, it needs to be emphasized that all of the research that has been conducted in conjunction with the peptide has only been constructed around scientific studies that have been based on animal test subjects.  Furthermore, the current use of the peptide is solely intended for scientific research purposes and nothing more.  Any findings or observations relating to SNAP-8’s overall functionality the determinations that can be derived from such observations should be exclusively contained to a strictly controlled environment such as a laboratory or a medical research facility.