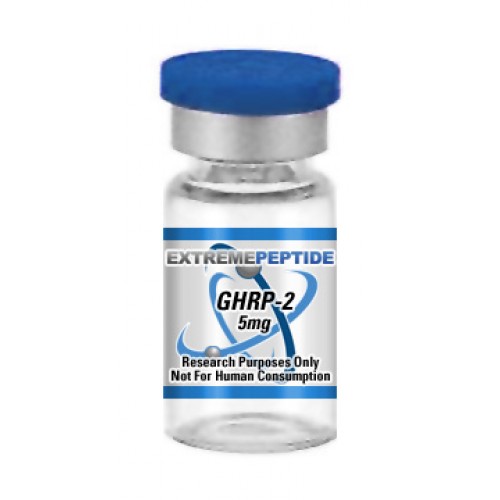 GHRP – 2 is a non-glycosylated secretogogue peptide that is occasionally known by the names KP-102 or GHRP.  It contains a molecular mass of 817.9 and its molecular formula is C45H55N9O6.  Its structure is comprised of six amino acids, thus enabling it to have the classification of a hexipeptide.

GHRP – 2 and the Pituitary Gland

It has been de

termined through scientific study on animal test subjects that GHRP – 2’s functional mechanics can be linked to the pituitary gland; the pea-shaped gland that is located at the bottom of the hypothalamus at the base of the brain.  In essence, this gland acts as the primary base of regulation and control of a host of endocrine system-related processes, ranging from growth and metabolism to pain relief and temperature regulation.

In essence, GHRP – 2’s functionality enables a boosted level of pituitary gland secretions to occur, thus leading an animal test subject to experience a greater level of homeostasis.  The reason that it can accomplish this feat is because it can prevent the secretion of a peptide known as somatostatin; a secretion that essentially regulates the endocrine system and all of its regulatory functions.  Further studies have also demonstrated that it can also increase the levels of calcium ion influx, which can in turn stimulate an increased level of growth-related secretions.

GHRP – 2 and the Stomach

Additional scientific study that has been conducted on animal test subjects has also determined that GHRP – 2’s overall functional process has a definitive link to the liver.  Specifically, it has a link to the secretion of an enzyme called ghrelin.  In essence, gherlin is expressed by the stomach as a means to create the sensation of hunger in an animal test subject.  Its expression also acts to counter the effects of leptin; a secretion whose expression triggers the sensation of feeling full.  Studies have shown that GHRP – 2 contains the ability to elevate the production of ghrelin, thus causing an animal test subject to experience the sensation of feeling hungry for a longer interval of time.  This then creates a desire to consume a larger intake of food.  This boosted level of food can in turn be converted to the fuel that is needed for the elevated effects that are linked to the boosted stimulation of the pituitary gland.

Further studies that have been based on animal test subjects have determined that GHRP – 2 also has a link to functions relating to the liver.  Specifically, it has been shown to boost the production of a peptide known as Insulin-like Growth Factor-1, also known as IGF-1.

How these Functions Tie Together

GHRP – 2’s functionality as it relates to the pituitary gland, stomach, and liver has caused scientific study based on animal test subjects to determine that these interactions can combine to create various endocrine system-related process elevations.  Some of these elevations include:

It needs to be noted that all of the research that has been conducted relating to GHRP – 2 has been solely built around the scientific study based on animal test subjects.  Therefore, any findings or observations that relate to GHRP – 2’s overall functionality, mechanics, or theoretical benefits, should only be contained to the strict confines of a controlled environment such as a medical research facility or a laboratory.