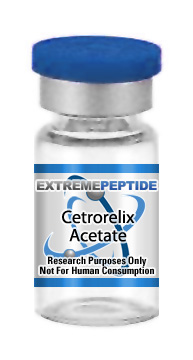 Ceterorelix acetate refers to a gondatropin releasing hormone antagonist. This is a synthetic decapeptide that is regularly researched for its role in combating hormone sensitive cancers, such as breast or prostate cancers, as well as its roles in some gynecological disorders in women. Cetrorelix acetate may also be researched for its potential in inhibiting surges of luteinizing hormones by blocking the GnRH from the pituitary gland. This peptide is capable of suppressing an animal’s production of FSH and LH for this purpose.

Reactions and pulmonary absorption of cetrorelix acetate was followed in rats using a method of non-surgical intratracheal instillation.

Four groups of rats including seven rats each were provided with varying concentrations of cetrorelix along with two control groups containing ten and nine rats respectively.

Acting as a Potent Antagonist of LH-RH

Single applications beginning with a high amount of the chemical moving down to maintenance sized applications were applied to each group.

The stability of each molecule that was affected by the degrading enzymes indicated that this poorly soluble pamoate salt was inadequate for facilitating sustained release of active compounds.

These salts did produce a suppression that prolonged testosterone levels and tumor growth. This allowed researchers to conclude that cetroroelix may be a useful LH-RH antagonist that could be developed more fully to address hormone dependent diseases.

Regular and high applications of cetrorelix in animal test subjects have also been found to cause severe renal impairment in some test subjects. This is particularly found in female test subjects which are advanced in age, past the point of a natural menopause.

There is also a very high record of allergic reactions of cetrorelix in a variety of types of animal test subjects, so any animals exposed to this peptide should be monitored with care.