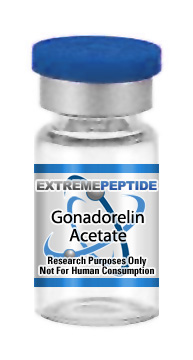 This hormone is used by an animal’s body as a diagnostic aid that assists with hypothalamic-pituitary axis function. Some studies have also looked into the potential use of the synthesized version of this peptide as an infertility therapy agent.

When produced by an animal’s body gonadorelin acetate acts as a natural gonadotropin releasing hormone (GnRH) which is primarily used as a means of synthesizing and releasing luteinizing hormone throughout the body from the anterior pituitary gland. This chemical can also act as a follicle stimulating hormone by increasing production of this chemical, though research has indicated that this behavior occurs to a much lesser degree.

Research often centers around applying this chemical in prepubertal female test subjects as a means to control or eradicated gonadal function disorders that may require an additional LH or FSH response from the body.

Responses to Gonadorelin in Holstein Heifers

LH and FSH concentrations in heifers were monitored after intramuscular applications of fertirelin acetate and GnRH products including gonadorelin acetate.

In general it was found that fertirelin acetate could be between 2.5-10 times stronger than gonadorelin while buserelin is around 10-0 times more potent than these chemicals in facilitating FSH or LH release.

Researchers are focusing a great deal on providing a delivery system for peptides, drugs and hormones through a reproductive or endocrine delivery system.

Gonadorelin acetate that is prepared for research settings is designed with a rapid metabolism as compared to other biologically inactive peptide fragments. The initial half-life of this chemical is 2-10 minute with a terminal half-life of 10-40 minutes. The duration of the action of gonadorelin acetate is 3-5 hours once applied. It is eliminated from the body via inactive metabolites or renal excretion which may vary based on the application.