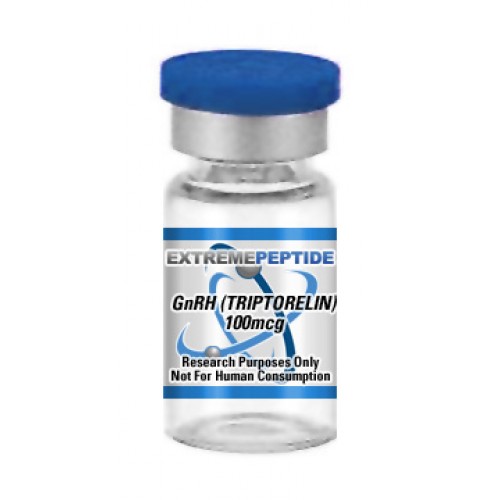 GnRH (Triptorelin) is a decapeptide that is classified as a gonaodtrophin-releasing hormone agonist.  Its alternate names are Gonapeptyl, Decapeptyl, Variopeptyl, and Diphereline.  It has a molecular formula of C64H82N18O13, and its molecular weight is 1311.5.

According to scientific studies conducted on animal test subjects, it has been determined that GnRH (Triptorelin)’s functionality enables it two perform three tasks:

The primary theoretical benefit that has been linked to the peptide’s presence is its theorized ability to help aid in the treatment of hormone-responsive cancers.  Certain forms of cancers, most notably breast cancer and prostate cancer, has been shown to contain a partial link to the secretion of luteinizing hormones and its association with regulating levels of estrogen and testosterone.  Because GnRH (Triptorelin) has the capacity to lower the production level of luteinizing hormones, it has been thought that the presence of the peptide can be instrumental in preventing or slowing the effects of the cancers that have been linked to the hormone’s secretion.

Another theoretical benefit associated with GnRH (Triptorelin) is its potential ability to treat certain estrogen-dependent conditions in female animal test subjects.  Again, this theory ties to the peptide’s ability to inhibit the production of luteinizing hormone and therefore can slow down the production of estrogen in female animal test subjects.  This has led to the theory that the peptide can aid in combating certain conditions such as endometriosis or uterine fibroid.

Another benefit that has been theorized in relation to the peptide is its potential ability to slow the process of precocious puberty; that is, the onset of puberty that occurs at an unusually early age.  The reason behind this particular theory lies with the peptide’s ability to lessen the release of follicle-stimulating hormone and therefore regulate the release of its secretions relating to growth and pubertal maturation on a more efficient basis.

Potential Side Effects of GnRH (Triptorelin)

According to scientific study that has been conducted on animal test subjects, it has been determined that GnRH (Triptorelin) can be linked to several negative side effects of varying severity.

Some of the more common side effects that have been theoretically linked to GnRH (Triptorelin) include fever, joint pain, general discomfort, diarrhea, muscle pain, insomnia, and shivering.  These negative side effects tend to affect the bodies of animal test subjects in a mild manner.

Some of the less common side effects that have been tied to GnRH (Triptorelin) include bladder pain, bloody or cloudy urine, blurry vision, a decrease in urination frequency or urination volume, difficulty breathing, or swelling or bloating in the face or extremities.

Additional scientific study on animal test subjects have also led to the theory that the presence of GnRH (Triptorelin) could potentially result in more serious negative side effects, including issues that are related to high blood pressure or heart disease.