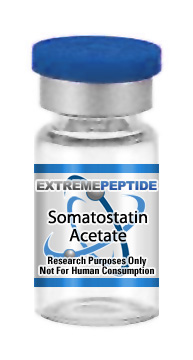 This is a hormone that helps the body to manage the endocrine system by impacting cell proliferation and neurotransmission by interacting with somatostatin receptors (G protein-coupled) to inhibit the release of secondary hormones throughout the body.

There are two active forms that are often produced by preproprotein, one containing 28 amino acids and one that contains 14 amono acids. Vertebrates have six different genes that participate in somostatin production, allowing it to perform a variety of functions depending on the animal in which it is displayed.

Somatostatin may be produced in an animal’s digestive system to encourage acid producing parietal cells while decreasing production of histamine, gastrin and secretin. It is also present in the gastrointestinal system to stop the release of overactive gastrointestinal hormones to suppress pancreatic hormones or decrease the rate in which the gastric system empties while improving blood flow to the intestines.

This is classified as an inhibitory hormone which can be spread to many other areas of the body in an animal, particularly in inhibiting the release of thyroid stimulating hormone.

Somatostatin is used in therapeutic peptide applications that have become entrapped in polymeric microspheres from a molecular weight with a variety of modifications using an O/W solvent evaporation method.

This chemical can be dispersed in a solid or dissolved at the aid of the co-solvent or it can be emulsified and dissolved into a co-solvent. It may also be emulsified within an aqueous solution with an organic polymer solution.
Encapsulation efficiencies can be obtained with all of these methods regardless of the polymer type used or the state of the chemical once it has begun.

In more cases lipophilic solvent systems can be used to favor an efficient drug encapsulation. This has largely been replacing toxic methylene chloride lower drug loadings and has affected the morphology of this chemical release.

A study has investigated the effects of somatostatin on experimental angiogenesis in vivo and in vitro.

It was found that applying octreotide reduced the proliferation of endothelial cells while the density of this vascular network would chick chorioallantoic membranes.

The proliferation of endothelial and smooth muscle cells in the rat aorta were reduced by octerotide. A similar cell sprout was seen in the fibrin cells.

Topical administration of the octerotide was inhibited rat cornea neovascularization that was induced by these controls. This could be used as an angiogenesis for rat mesentery in mast cells deregulating agents. These chemicals may also be able to reduce neovascularization tendencies, compared to traditional controls. This implies that octerotide may be more effective in managing these conditions than somatostatin.

Within the brain somatostatin is produced by neuroendocrine neurons in the hypothalamus where it is then released in the hypthalamo-hypophysial system and carried through the anterior pituitary gland.