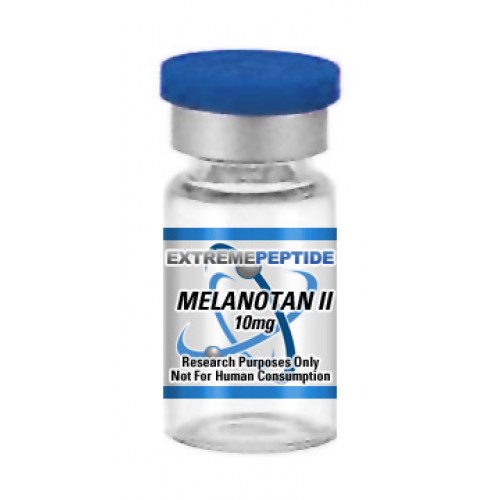 Melanotan II, also known as Melanotan 2 or MT-2 but different from Melanotan I, is a peptide that has a molecular mass of 1024.180 and a molecular formula of C50H69N15O9.  It has been shown through scientific study on animal test subjects to have an ability to enhance the protection against harmful ultraviolet, or UV, rays.

Melatonan II and the Pituitary Gland

The primary function of Melatonan II can be tied to the pituitary gland; the tiny gland located at the bottom of the hypothalamus at the base of the brain whose main purpose is to control and regulate several of animal test subject’s endocrine system-related processes, including growth, metabolism, temperature regulation, and more.  Specifically, scientific study that has been based on animal test subjects has determined that Melatonan II works in conjunction with a pituitary gland-based expression α–MSH, which is shorthand for alpha-melanocyte stimulating hormone.  In essence, this expression is charged with the regulation and control of skin and hair pigmentation; this process is carried out by the hormone’s secretion which is known as melanin.

According to scientific study that has been based on animal test subjects, the secretion of melanin is typically initiated through the exposure of ultraviolet rays.  When this particular secretion occurs, it is chiefly presented upon the skin.  This is a process that is scientifically known as melanogenesis.  When melanogensis occurs, It acts as a natural means of protection against ultraviolet exposure and its inherent harmfulness. Ultimately, the process acts as a means of safeguarding the animal test subject against a host of skin afflictions and ailments that may otherwise result from prolonged exposure to ultraviolet rays.  Primarily, this would mean protection from various forms of skin cancers.  Yet scientific study based on animal test subjects has determined that the half life of the α–MSH hormone is rapid in its nature – it has been determined to only last a few minutes.  As such, the hormone’s ability to create melanin and initiate the protective processes of melanogenesis is extremely brief. However, these studies have gone on to determine that Melatonan II’s overall functionality can cause a lengthening of the hormone’s brief half-life. Scientific study has noted that the overall functionality regarding Melatonan II has been shown to be much more effective when the presence of UV rays has been part of the research process.

Not surprisingly, a lot of the scientific study revolving around the functionality and operational mechanics of Melatonan II has been geared to scrutinizing any possible link it may have to the protection and even elimination of certain types of cancer.  These particular studies tend to hone in on Melatonan II’s ability to boost the production of melanin and ultimately the process of melanogenesis without the presence of deadly UV rays.  In essence, these studies indicate that because of Melatonan II’s capacity to take UV rays out of the process of melanin production, the animal test subject has a significantly more efficient means of protecting itself from cancer and other skin issues that the rays would bring about.  That being said, these studies have also indicated that the presence of Melatonan II has been shown to protect the skin against the deadliest form of skin cancer, malignant melanoma.  The reason for this is that this particular form of skin cancer has been determined to be a product of indirect DNA damage and not by prolonged exposure to ultraviolet rays.